as my buddy john would say..."beautimiss" 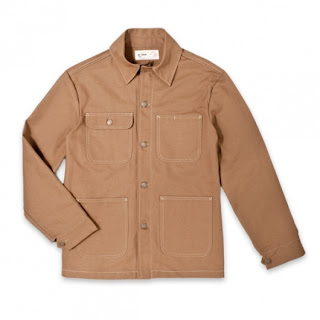 *Additional Information*
As a child, Matt was into everything. This rambunctious curiosity led his grandmother to refer to him as a “jack of all trades, master of none.” In honor of Matt, we call our version of this classic utility jacket, “Jack.” As its name would suggest, Jack is equipped to get into anything and everything right along with you. Made of rigid duck canvas and planted with four large patch pockets across the front, it should keep up nicely. We’ve modernized the boxy fit of vintage chore coats for something more tailored, but Jack is unlined, so it is roomy enough to be worn over a sweater. Packability, durability, versatility; pass it along to the next generation because this design would suggest that Matt might be, in fact, the master of one.

Sizing:
Jack runs true to size. Order as you normally would.
Shrinkage:
The Jack is sold unwashed, however shrinkage should be minimal to none. For a perfect fit, consider soaking and wearing damp until dry.
Care:
Wear often. Wash not so often.

Posted by A Financial Statement at 1:10 AM