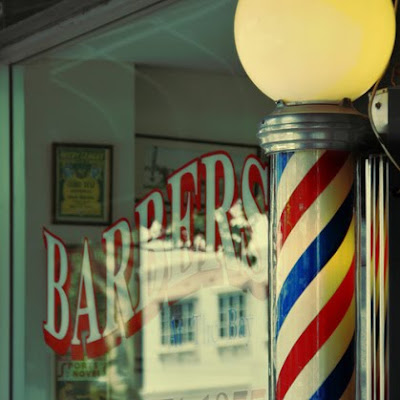 After seeing my buddy "google" search for "salons" around his area, and talking to my buddy 'Drew...I finally decided it was time to post this article from the Art of Manliness:
For the past few months, I’ve been having my haircut at various barbershops in Houston. For most of my life, I went to unisex salons that reeked of perm chemicals, mousse, or even nail polish. Every time I’d go, I’d walk away with a crappy haircut. On top of that, I always felt out of place. Most of the clients were usually women and 9 out of 10 times, it was a woman cutting my hair. I’d just go in, sit there silently while the person cut my hair, and leave.
I don’t know why I stopped going to a barbershop. As a child, my dad would take my brothers and I  to the local barbershop that was relatively close to our house.  I remember being fascinated with all the barber's stuff. What I remember most though, was the distinct "manliness" of the place. Even as a young child, I could sense that a barbershop was a legit hang out for men. I’m now FINALLY rediscovering the barbershop. You should too.

Before you go check out How to Talk to Your Barber.
A Brief History of Barbershops
The 1880′s to the 1940′s were the golden age for barbershops. During this time, men socialized in all male hangouts, and barbershops rivaled saloons in popularity. Visiting the barbershop was a weekly, and sometimes daily habit. Men would stop in not only for a haircut and a shave, but also to fraternize with friends and chew the fat.
During this golden age, barbershops were classy places with often stunning surroundings. Marble counters were lined with colorful glass blown tonic bottles. The barber chairs were elaborately carved from oak and walnut, and fitted with fine leather upholstery. Everything from the shaving mugs to the advertising signs were rendered with an artistic flourish. The best shops even had crystal chandeliers hanging from fresco painted ceilings.
Despite this level of luxury, barbershops were homey and inviting. A memorable and heavenly man aroma filled the air. The smell of cherry, wintergreen, apple, and butternut flavored pipe and tobacco smoke mixed with the scent of hair tonics, pomades, oils, and neck powders. These aromas became ingrained in the wood and every cranny of the shop. The moment a man stepped inside, he was enveloped in the warm and welcoming familiarity. He was immediately able to relax, and as soon as the hot lather hit his face, his cares would simply melt away.
The first blow to barbershops came in 1904 when Gillette began mass marketing the safety razor. Their advertisements touted the razor as more economical and convenient than visiting the barbershop. The use of safety razors caught on, and during World War I, the US government issued them along with straight razors to the troops. Having compared the two razors size by side, upon returning home from the front many soldiers discarded both the straight razor and their frequent trips to the barbershop. Going to the barber for a shave became a special occasion instead of a regular habit. 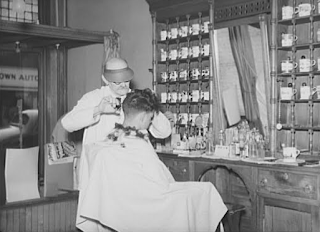 The Decline
In the decades after WWI, several other factors combined to weaken the place of the barbershop in society. Companies like Sears began selling at-home haircutting kits, and mom began cutting Junior’s and Pop’s hair. Then the Depression hit, and people cut back on discretionary spending like barber shaves. The loss of male lives in the World and Korean wars also shrunk barbers’ pool of clientÃ¨le. Then in the 1960′s Beatlemania and the hippie culture seized the country, and hairstyles began to change. Men started to grow their hair longer and shaggier, and their visits to the barber became infrequent or non-existent.
Even when short hair came back into style during the 1980′s, men did not return en masse to the barbershop. Instead, a new type of hairdresser siphoned off the barbers’ former customers: the unisex salon. Places like “SuperCuts” which were neither beauty salons nor barbershops, catered to both men and women. Many states’ licensing boards accelerated this trend by ceasing to issue barber licenses altogether and instead issuing a unisex “cosmetologist” license to all those seeking to enter the hair cutting profession. 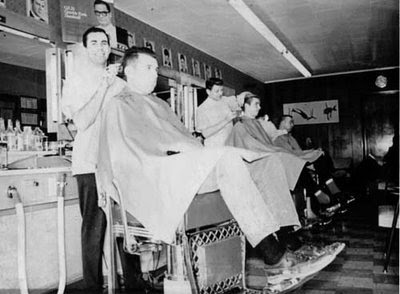 [Source] Art of Manliness
Posted by A Financial Statement at 12:02 PM